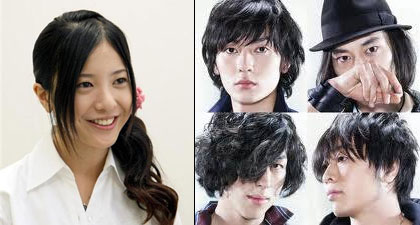 It seems that actress Yoshitaka Yuriko (21, photo left) has split with actor Tamaki Hiroshi (30) and has already moved on. A source close to Tamaki told the Sankei Sports newspaper that the pair split up about a month ago. Meanwhile, today’s issue of the “Josei Seven” weekly magazine includes shots of Yoshitaka on a recent date with Amakawa Genki (25, photo bottom left), bassist with the rock band Flumpool. After enjoying the cherry blossoms and dinner at a local izakaya restaurant, they returned to Amakawa’s apartment. Asked to comment on the relationship, management for Yoshitaka said the pair are just good friends and had stayed up late playing video games!

Yoshitaka and Tamaki started dating after they worked together on the 2009 TBS drama “Love Shuffle.” But their mutually busy TV and movie schedules, and Tamaki’s music career, kept them apart for long periods. In an Oricon poll last year of the most promising actresses for 2010, Yoshitaka was ranked No.1.

Stylist Lashes Out at Yamamoto Taro & His Mother
A former stylist for actor Yamamoto Taro (35) has claimed that she was swindled and physically abused by his mother. An interview in today’s issue of the weekly magazine “Shukan Bunshun,” includes the claim that the woman was ripped off to the tune of ¥18 million in salary deductions and fines. Management for Yamamoto say the claims are false and they are preparing a libel case against the woman, who they say was incompetent.

Kato Noriko on the Verge of Divorce
Talento Kato Noriko (37) and creative director Wakatsuki Kiyoshio (48) are said to be negotiating the terms of their divorce. The couple tied the knot on New Year’s Day 2006 after a romance of just a few months. They have no children, though at the time of their marriage Kato said she wanted to start a family.

Kato started out as a teen aidoru in 1991 and made her solo music debut the following year. She landed her first TV drama starring role in 1997. In her late 20s she spent a few years studying in France before returning to work full-time in Japanese showbiz in 2002.

UPDATE: In a fax sent to the media this afternoon, Kato acknowledged that she and Wakatsuki have formally filed for divorce, citing irreconcilable differences in their values and lifestyles.