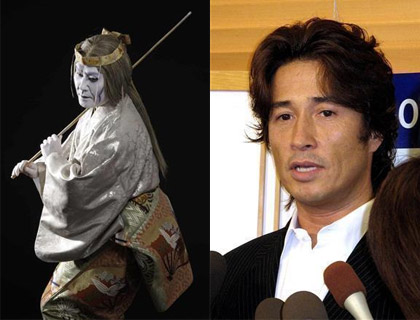 Kabuki actor Ichikawa Ukon (46) announced this morning that his wife gave birth to a baby boy on Sunday. Though he is on his third marriage, the child is the first for Ichikawa.

Someone else getting a late start on fatherhood is former actor and talento Haga Kenji (48). His wife Mayu (32) gave birth to a baby girl yesterday. The couple got married at the end of 2006, shortly before Haga was arrested for fraud and attempted blackmail. A verdict in his favor was appealed by the Osaka District Court, and a decision is due to be handed down by the Osaka High Court next month.

Okada Doubles Up on SP Duty
Okada Yuichi (29), a member of the Johnny’s Jimusho idol group V6, appeared at a PR event yesterday for his latest action movie. It was announced that “SP – The Motion Picture,” the big screen spinoff from his 2007 Fuji TV drama series, will be released in two parts. Directed by Hatano Takafumi, the first episode, “Yabou-hen” will be in theaters from October 30, followed by the release of “Kakumei-hen” next spring. Fuji producer Kameyama Chihiro said, “We originally planned to make just one movie, but we had such an abundance of ideas that we decided we had enough for two.”

The term SP refers to the professional bodyguards who protect VIPs. In the TV drama, Okada played a rookie SP with a special set of skills. The show won several awards, including a Best Actor prize at the TV Drama Academy Awards. During his 10-month preparation before shooting began Okada, who did his own stunts, said he found he was constantly focused on his role. But that take a toll on his private life? After yesterday’s event reporters quizzed him about his recently reported breakup with actress Aoi Yu (24), but Okada declined to comment.