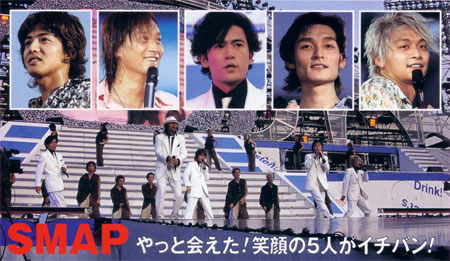 Though they have ruled the Japanese airwaves for much of the last 22 years, SMAP have never performed outside Japan. That’s finally about to change, as they are lined up to perform at the Shanghai World Expo in June. The event, to be called the “SMAP Banpaku Fan Tsudoi” (SMAP Expo Fan Gathering) will be held at the 18,000-seat Expo Cultural and Performing Arts Center from 1pm on June 13. Tickets will be free and people can reserve seats using an automated reservation system in the venue on the day.

The last few years have seen more and more Japanese artists, including some of their Johnny’s Jimusho stablemates, expand their horizons across Asia. And there is no doubt that SMAP have a large fan base in the region. They were the only Japanese artists formally invited to the expo’s opening event on May 1. Expo organizers announced, “They are representatives of Japanese popular culture not only at home but in Asia. We are sure they will add to the festive mood of the Expo.” 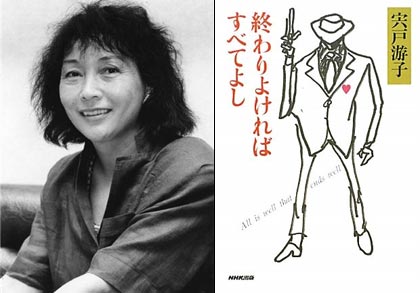 Essayist and former actress Shishido Yuuko died earlier this month, it was revealed yesterday. She was 77. It is believed that the cause of death was the cancer which she has been battling for the last couple of years. As part of her treatment, she underwent surgery in 2008 to have her stomach removed. Last year the cancer was found to have spread to her lungs and she was regularly in and out of hospital until her condition worsened in March. Her two sons, actor Kai (43) and his manager Hyou, were with her when she died, but her husband, actor Shishido Jo (76) was working. Up until her death Yuuko had been working on the realization of her dream – producing a movie starring her son and with her husband in a main supporting role.

Born in Manchuria in 1933, she met Shishido shortly after she joined the Nikkatsu movie studio in 1956 and they married in 1962. She became a full-time wife and mother but started a writing career in her 40s. Her last work was the novel “Owariyokereba Subeteyoshi” (All’s Well That Ends Well) which was published in January.

Oda Kazumasa’s Mega Long-Seller
Oda Kazumasa’s 2002 greatest hits collection “Jiko Best” has reached a new record milestone with its 400th week in the album charts. The record is based on appearances in the Top 300 of Oricon’s weekly chart. Meanwhile at the top of the same chart this week is “Vocalist 4,” the fourth album of covers by Tokunaga Hideaki (49). Rock band Bump of Chicken are at No.1 on the singles chart with “Mahou no Ryori/Kimikara Kimihe.”