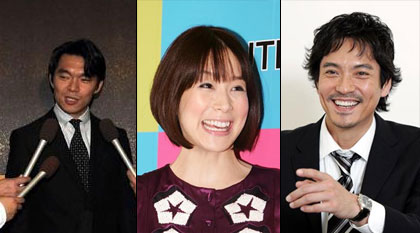 Rakugo-ka Yanagiya Karoku (38, photo left) announced yesterday that he got married on Sunday. Speaking with reporters after a memorial service in Tokyo for the late shikaisha Tamaoki Hiroshi, he said that his new bride (42) was an ippanjin who was originally a fan. “She is very good at looking after my eight apprentices. She’s well suited to being the wife of a rakugo-ka.” The couple started dating last summer, just a few months after Yanagiya ended his 7-year marriage to fellow rakugo-ka Hayashiya Kikuhime (39). He is the grandson of Yanagiya Kosan (1915-2002), the first rakugo-ka to be named as a Living National Treasure.

Meanwhile, actor Sawamura Ikki (42, photo right) revealed in today’s issue of the “Josei Jishin” weekly magazine that his wife is expecting their third child at the end of this month. Dad’s on the small screen from this Friday starring in the catchily-titled new TV Asahi detective series “Keishichou Shissoka – Takashiro Kengo.”