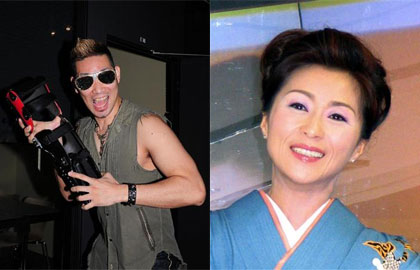 Comedian Razor Ramon HG (34, photo left) is determined not to be remembered as a one-hit wonder, and is making a comeback from serious injury. Hugely popular for a couple of years with his Hard Gay character, he made a switch from comedy to full-time professional wrestling with the Hustle promotion. But he suffered multiple fractures in his left foot following a dive from the ring at Korakuen Hall last July. He was taken to a Tokyo hospital but told that, as the injury wasn’t life threatening, he’d have to wait three weeks for surgery. Wrestling associates introduced him to another hospital where, a week later, he had 12 bolts inserted to hold his foot together. He spent the following two months in hospital and required a skin graft to repair his foot.

Real name Sumitani Masaki, HG has been unable to work since the accident, undergoing two major operations. He’s set to make his return as a regular on the TBS variety show “Sekai Waraeru! Journal” later this month. Asked if he was stuck for money, he replied, “Over the last eight months, I’ve made as little as ¥7,000 ($75) a month. I was like a pimp! But I was okay because my wife was earning about ¥1 million.” He married former pin-up girl Suzuki Anna (27) in 2006 and they had a son in July 2008.

Holding the leg brace he wore for several months, HG said yesterday, “I’ve retired from wrestling and I’m going to get back to TV and acting. I’m aiming to be a two-hit wonder!”

Nagayama Yoko to be an Arafo Mother
Enka singer Nagayama Yoko (42, photo right) is finally realizing her dream. As a girl, she planned to get married and have a baby around the age of 20. Well she was only two decades late in achieving the first of those when she married American businessman Mark Smith (41) a year ago. And yesterday she announced on her blog the happy news that she is expecting her first child. She said she is a five months pregnant but won’t be taking maternity leave until after she records the June 23 edition of her regular TV Tokyo show.

Nagayama says she plans to continue her career: “Being a mother and working, these are both precious treasures in my life. As for my work, I will try not to be a burden to my fellow staff.” Speaking about having her first baby in her 40s, she said, “To be honest, I am a bit nervous. But I hope I can be an inspiration to other women of the ‘arafo’ generation.” The term ‘arafo’ has been widely used in the last few years to refer to people, particularly those getting married or having children, who are “around forty.”