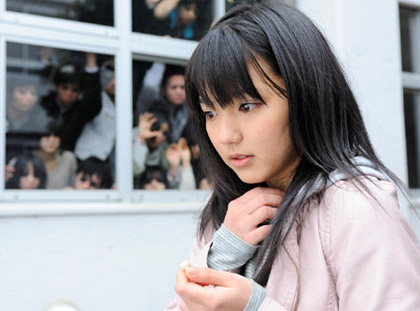 Popular young aidoru Mano Erina (19) is making a U.S. debut of sorts this summer. With the popularity in recent years of J-horror movies, she can expect a lot of attention at the Anime Expo that opens in Los Angeles on July 1. She will be there to to promote her first movie starring role, in the horror flick “Kaidan Shin Mimibukuro: Kaiki.” Directed by Shinozaki Makoto, it is scheduled to be in Japanese theaters in September. It is based on two short films, “Tsukimono” and “Nozomi” from the omnibus horror television series “Kaidan Shin Mimibukuro” which aired on the TBS satellite channel in 2003. Mano, who just last month graduated from high school, will play two different roles in the big screen version – a university student and a high school girl haunted by the thought she caused the deah of her sister. She also sings the movie’s title song “Uchi e Kaerou” (Let’s Go Home) in English.

Mano is a member of the huge Hello! Project family. A fan of Matsuura Aya, she entered an audition in 2004, but wasn’t selected. She finally made it in 2006 and became a member of Hello! Pro Egg. She went solo in the spring of 2008. At this year’s Nihon Gold Disc Taisho music awards, she was named as one of several Best New Artists.