Talento Hazama Kampei (60) is taking a medical break from his mammoth Earth Marathon, it was announced yesterday. Since December 2008, he has been running and sailing almost non-stop in an attempt to circumnavigate the globe. Having crossed the Pacific, North America, the Atlantic and Europe, in January he was discovered to have prostate cancer. After much discussion and deliberation, he decided to keep running while his medical team administered hormonal treatment. He got as far as Turkmenistan yesterday, crossing the border from Turkey on Day 484. But because the country lacks sufficient medical services, it was decided that Hazama would travel to the U.S. tomorrow and spend the next two months undergoing treatment there under a Japanese doctor. He is scheduled to visit the cancer center at the University of California in San Fransisco.

Hazama was quick to reassure his fans and supporters, “My condition hasn’t suddenly got worse, so please don’t worry. I made this ecision so that I will be able to complete the Earth Marathon. And I also made this decision for myself.” But there are concerns about the effect of a 2-month layoff. Even if he starts running again at the end of June as planned, he still has some 4,000km to go. 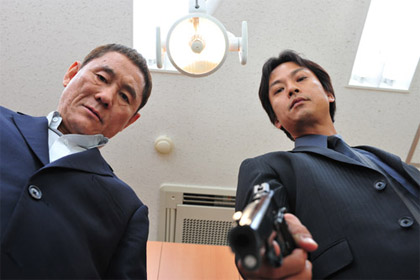 The latest movie from Kitano Takeshi (63, photo left) has been selected to compete at this year’s 63rd Cannes International Film Festival. Kitano is one of Japan’s most successful filmmakers on the international circuit and enjoys huge popularity in Europe. He was recently presented with France’s top honor for the arts and currently has an art exhibition at the Fondation Cartier in Paris. But this is only the second time he’s had a competitive entry at Cannes. The first was “Kikujiro no Natsu” back in 1999.

The Cannes appearance will certainly add to the hype for “Outrage,” which marks Kitano’s return to the action and violence genre that established him as a top moviemaker. 2003’s “Zatoichi” was his last R-15 rating, and that mixed music and dance numbers with a classic samurai tale. “Outrage” is a full-on yakuza flick, with lots of betrayal, mind games, and bloody violence. Kitano said, “It’s my first violent movie in a while, so I think there’s a lot of expectation. I’m looking forward to the audience reaction.” As well as Kitano himself, the strong cast includes Shiina Kippei (photo right), Kase Ryo, and Miura Tomokazu.

The movie is scheduled to open in Japanese theaters on June 12 but the Cannes audience will get to see it a month sooner as the festival runs May 12-23. It will be up against such entries as “Another Year” (Mike Leigh), Poetry (Lee Chang-dong), and “Burnt by the Sun 2” (Nikita Mikhalkov). President of the jury this year is director Tim Burton.
Earlier stories:
Kitano Takeshi Receives Top French Honor (Mar. 11, 2010)