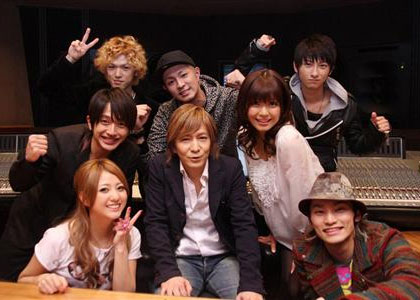 Producer Komuro Tetsuya (51, photo center, profile) is continuing his gradual comeback to the music scene. Serving a suspended prison sentence last May, when he was found guilty of fraud, he got back to work in February, performing a solo concert. Yesterday he announced his first releases as a producer since his wife Keiko’s solo album “O-Crazy Luv” in 2008. The two songs are by the 7-member group AAA (Triple A). “Aitai Riyu” is released as a download today, while “Dream After Dream/Yume Kara Sameta Yume” comes out on April 14. The tracks will be released as a the double-A side single on May 5. “Aitai…” is a medium-tempo ballad with lyrics by Kyasu Morizuki, best known as a writer for Do As Infinity; the dance pop number “Dream…” is a collaboration with Kenn Kato, who has worked with Exile since their 2001 debut.

Komuro has written some 60 songs over the last six or seven months and the Avex label asked him to work with AAA in order to help them “move up a notch.”
Earlier stories:
Komuro Gets Off With Suspended Sentence (May 1, 2009)

Abu-chan’s Wacky Wedding Ring
Comedienne Abukawa Mihoko (35) made one of the strangest marriage proposals on last night’s edition of the “Haneru no Tobira” comedy show. After surviving three rounds in the ring with boxer Stephanie Dobbs (29), ranked No.5 WBC light flyweight in the world, she earned the chance to propose to her boyfriend of two years. Masuya Shuichiro (37), owner-chef of the Osteria Lucca Italian restaurant in Tokyo, was seated ringside with another 400 people, but knew nothing of the plan. Abukawa said, “Please make me your wife!” and the unsuspecting Masuya immediately said, “If you’ll have me, I’d be honored.” “Abu-chan” is one half of the comedy duo Hokuyo, along with Ito Saori (35). 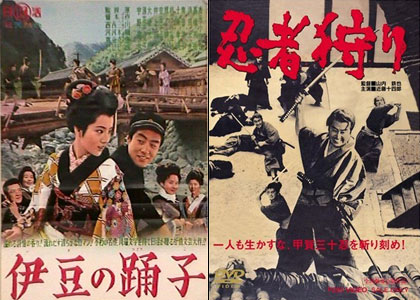 The Japanese movie industry lost a pair of its veteran directors in the last week.

Nishikawa Katsumi died at a Tokyo hospital of pneumonia on the morning of April 6. He was 91. Nishikawa joined Shochiku’s studios in Ofuna in 1939 and spent 13 years working as an assistant director before landing his first directorial job. He moved to Nikkatsu in 1954 and in the following years he helped shape the career of a young Yoshinaga Sayuri (65) and Takahashi Hideki (66) in movies like 1963’s “Aoi Sanmyaku” and “Izu no Odoriko” (poster left) and the late Ishihara Yujiro (1934-87) in “Wakai Hito” (1962). In the 1970s, he directed the golden couple of Yamaguchi Momoe (51) and Miura Tomokazu (58), who would later marry, in movies such as “Shiosai” (1975) and “Shunkinsho” (1976). In 2001, his hometown in Tottori Prefecture built a memorial hall in his honor.

Director and screenwriter Yamanouchi Tetsuya died of heart failure at his home in Hiroshima Prefecture on March 3, it was revealed yesterday. He was 75. After graduating university in 1957, Yamanouchi joined the Toei studio, and made his directorial debut with “Ninjagari” (poster right) in 1964. He is best known for turning out “jidaigeki” or period dramas for the big and small screen, though he often spiced things up with elements of horror and science fiction. He worked on the popular “Mito Komon” and “Oh-oka Echizen” TV series.