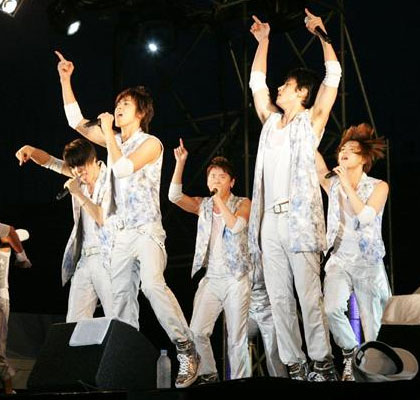 Korean pop quintet Tohoshinki received plenty of love from fans across Japan and Asia after their weekend announcement that they are indefinitely suspending all performances. Thousands of messages flooded in to their official website, and a spokesperson for the Avex record label said most of them were positive and expressed a desire for activity in the group’s fan club to continue. The announcement wasn’t entirely a surprise, as there had been rumors circulating for some time. Last July three of the five members – Jejung (24), Junsu (23), and Yunchun (23) – got into a legal dispute with their SM Entertainment management agency about the fairness of the 13-year contract they were signed to and the way profits were shared. The three won a court decision in October and set up a new management company, and several scheduled concerts were canceled.

The dance-vocal group debuted in South Korea in 2004 and in Japan the following year. They have had considerable success in Japan, with several No.1 hits, CD sales of over 5 million, and appearances on NHK’s annual “Kohaku Uta Gassen” New Year’s Eve concert and Nihon Record Taisho awards the last couple of years. Their last performance was a CDTV Special last New Year. All five members are said to be considering solo careers, and Jejung is to appear in a Japanese TV drama series later this month.

Kimura Takuya in Shanghai
SMAP’s Kimura Takuya (37) was in Shanghai over the weekend to start shooting his latest drama series for Fuji TV. “Tsuki no Koibito – Moon Lovers” will air from May 10 and is KimuTaku’s first romantic drama in about 10 years. Playing an interior design company president, he will have not one but three love interests, one of whom is popular Chinese model Lin Zhiling (35). The other main female roles will be played by Shinohara Ryoko (36), in her first drama role since becoming a mother in 2008, and Kitagawa Keiko (23).

Though very few Japanese dramas have ever been aired on Chinese TV, KimuTaku has a large following across Asia, and hundreds of fans turned out for a glimpse of him on location around Shanghai, including a restaurant near the landmark Oriental Pearl TV Tower.