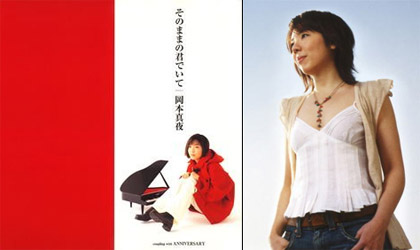 With the 2010 World Expo opening in Shanghai a couple of weeks away, organizers seem to have managed to dilute the scandal surrounding the event’s promo song. Since “Right Here Waiting For You 2010” was announced at the end of March, claims that it was a rip-off of a Japanese 90s hit have spread like wildfire on Chinese websites. Though some people predictably used the opportunity to bash Japan, the vast majority of opinion supported the Japanese artist, popular singer-songwriter Okamoto Mayo (36). Some went so far as to demand the death sentence for Miao Sen, the plagiarizing Chinese songwriter. Expo officials consulted with Okamoto’s management agency and a compromise was reached – “Sonomama no Kimi de ite,” a hit for Okamoto in 1997, would become the official promo song. This decision was officially announced yesterday, with a comment from Okamoto saying “It is wonderful and an honor to be given this chance to cooperate with the Shanghai World Expo, an event known around the world.”

The response from Chinese netizens has been overwhelmingly positive, with calls for Okamoto to visit Shanghai to perform the song. She has been popular in China since the release of a Taiwanese cover of her 1995 debut single “Tomorrow,” which sold 2 million copies in Japan. The scandal surrounding “Sonomama…” has seen the song climb the various charts for the first time in 13 years.