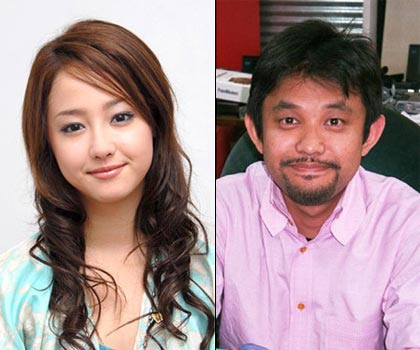 Sawajiri Erika (24, photo left) is rumored to be on the verge of divorce, it was reported yesterday. Last night’s edition of the Fuji TV show “Mr. Sunday” carried the story as its top news. A reporter confronted Sawajiri outside her Tokyo home yesterday evening and asked about the rumor, to which she replied only, “Sorry, I can’t say anything now. Try again in a few days.”

The actress has been married to hypermedia creator Takashiro Tsuyoshi (45, photo right) for only a year and three months, and she has barely worked in showbiz since the infamous “Betsuni” incident in September 2007. She was formally dumped by her management agency last September, but in March she announced that she had opened a management office in Spain and signed a commercial contract with the Takano Yuri beauty clinic chain. She appeared with Takano at a PR event on March 16, and set media tongues wagging yet again with a 6-point privacy agreement that any reporter had to sign before she would speak with them.

Sawajiri and Takashiro are said to be separated and she is staying with her mother. Yesterday’s Fuji TV show speculated that the couple have been having money problems. A source told the Sankei Sports newspaper, “Takashiro has provided almost no financial support to his wife for her showbiz or personal expenses. Since she spent time studying in the U.K. and Spain, she has been stuck for money.” Another source said that while Takashiro is intent on basing himself overseas, his wife wants to take advantage of the many movie and recording offers that she has received in Japan.