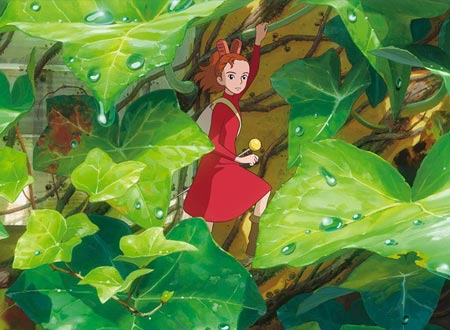 Just as we announced that the third “Odoru Daisosasen” movie was an early favorite to be the biggest hit of next year, the Toho studio yesterday gave the first glimpse of what is likely to be its biggest rival. Studio Ghibli producer Suzuki Toshio (62) said at a press conference that the company’s latest anime feature film, “Karigurashi no Arrietty,” is scheduled for a summer release so it’ll be going head to head against Oduru 3. Though he has worked on the screenplay, Miyazaki Hayao (68) has handed the directorial reins for the first time to Yonebayashi Hiromasa (36), who was animation director on “Gedo Senki” and key animator on other features including last year’s “Gake no Ue no Ponyo.”

“Karigurashi…” is based on Mary Norton’s award-winning fantasy novel “The Borrowers,” which won the Carnegie Medal in 1952. The novel is set in England during the same period, but Ghibli have updated it to modern Japan. It is about 14-year old Arrietty and her family of 10cm-tall little people who live under the floorboards of a house and get by on items borrowed from the humans above. Miyazaki has wanted to adapt the book since he read it more than 40 years ago. The movie’s theme, “Arriety’s Song,” co-written and performed by French musician Cecile Corbel, will have its digital release in Japan on December 19.

• Avex Management and an advertising firm have been informally indicted at the Tokyo District Court over an event held back in April. The guerrilla event was held on the afternoon of April 7 to promote the launch of a book by J-pop queen Hamasaki Ayumi (31). The venue was in front of the Shibuya 109 store in the center of one of Tokyo’s most popular shopping districts, and though Hamasaki didn’t perform she soon drew a crowd of almost 3,000 people. This led to traffic disruptions as organizers had not sought the cooperation of police or even filed for permission to hold the event. In August police filed papers with the prosecutors office against 11 people from Avex, ad firm Ozone Network and Shibuya 109. Charges against five people, including those from 109, were dropped before yesterday’s indictment.