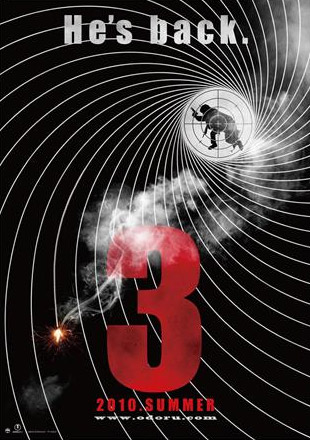 A release date has been set for what will probably be the biggest Japanese movie of 2010. The third installment in the “Odoru Daisosasen” (Bayside Shakedown) series will open on July 3. Once again, Oda Yuji (42, profile) will star as detective Aoshima Shunsaku – now promoted to section chief – who finds his head spinning as he tackles eight crimes at once. Also returning is director Motoyuki Katsuhiro, and he and the cast are gearing up for filming, which is due to start in the new year. The 2004 death of actor Ikariya Chosuke, who played the character of Waku Heihachiro in the previous movies, will be acknowledged in the new sequel. The series was born in 1998 from a popular Fuji TV drama series starring Oda. Though the first movie was a huge success, the 2003 sequel was even more massive and holds the record for the biggest box office earnings of any Japanese live-action movie with ¥17.5 billion. There have also been a couple of successful spinoffs featuring side characters.

• Meanwhile, the latest big screen adaptation of the popular “One Piece” manga has had the strongest opening weekend at the box office in the last six months. “One Piece Film Strong World” broke the ¥1-billion barrier on just 188 screens, something which “Harry Potter and the Half-Blood Prince” narrowly failed to do during the summer despite showing on 844 screens. That blockbuster went on to make ¥8 billion. The strong weekend opening of “One Piece” at ¥1.038 billion is better than that of last year’s No.1 box office success, the Miyazaki Hayao anime feature “Gake no Ue no Ponyo.” It opened with ¥1.025 billion and went on to rake in ¥15.5 billion. Toei realize that “One Piece” doesn’t have Ponyo’s broad appeal and have set their box office target at ¥5 billion.