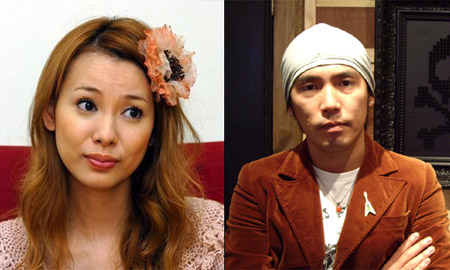 Management for talento Uehara Sakura (32, photo left) announced yesterday that she and her husband of six years have divorced. She and Endo Noriaki (37, photo right), founder and president of the Devilock street fashion brand, were friends for three years before they married in August 2003. Uehara was pregnant at the time but later had a miscarriage and the couple have no children. Endo was arrested earlier this year after he assaulted a paparazzi photographer at the wedding of showbiz friends. As a sign of repentance, Uehara put her own television career on hold for a month. Uehara’s management said yesterday that, despite Endo’s arrest, there was no history of domestic violence and there is no alimony agreement between the two. The couple were already living separately before Endo filed the divorce papers yesterday. In her blog Uehara said, “Rather than carry on as married friends, we’ve decided it would be better to each go our own way and start over.” She said of her ex, “He is a really nice guy, smart, hard-working and very thoughtful towards his family and friends. We may no longer be a couple but I still love and trust him.”
Earlier story:
Fashion CEO Arrested in Paparazzi Assault (Apr 6, 2009)

• Actress Esumi Makiko (42) gave birth to her second child in the early hours of Monday morning. Married briefly in 1996 to photographer Kirishima Roland (41), in 2003 Esumi married a Fuji TV producer who worked on her hit comedy drama series “Shomuni.” They had a daughter in 2005.

• Japan’s women won yet again at the Cheerleading World Championships, held in the German city of Bremen. The women have won all five of the bi-annual events. One member of the team was Takayama Iyo (21), daughter of comedian Takayama Tomohiro (41) and a senior at Baika Women’s University in Osaka. Japan also won the gold medal, for the 4th time, in the 16-member mixed group competition.