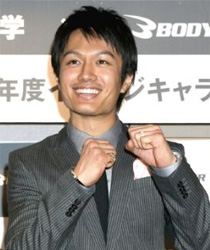 Actor and singer Oshio Manabu (29) made his first public appearance in almost two years in Tokyo yesterday. He was in the capital to promote the brand Bodymaker, a line of training goods for combat sports. He did about a month of intensive physical training to get in shape for the photo shoot for posters that show him topless, though for yesterday’s event he wore a somber gray suit. In his first appearance since a movie PR event in March 2006, he spoke about his new baby. His wife, actress Yada Akiko (29) gave birth to their son Liam on November 19. Oshio said he chose the name, but that it has no special meaning. He seemed somewhat more relaxed in front of the media than he has been in recent years. He has yet to speak publicly about why he abandoned a promising acting career to pursue music. He and his family now live in the U.S.

• Chico Honma, a member of the band Los Indios, died last Christmas, it was reported yesterday. Real name Honma Yasuyoshi, he was 67. He is said to have died after falling from the balcony of his apartment in Tokyo’s Nakano Ward. With their Latin American sound, Los Indios had a string of hits in the 1960s but have remained active. Their last big hit was 1980’s “Wakaretemo Sukina Hito” with the singer Sylvia. Honma was the guitarist in the band, and also pioneered the use of such Latin instruments as the arpa in Japan.

• “Bara no Nai Hanaya”, the latest Monday night drama series on Fuji TV, has got off to a good start. The show stars SMAP junior member Katori Shingo (30) as the widowed manager of a small flower shop and Takeuchi Yuuko (27), and is written by the Nojima Shinji (44), the man behind a string of major hits. The first episode got an average audience rating of 22.4% according to Video Research. The show’s strong start follows the success of last season’s “Galileo” in the same 9pm Monday time slot, called “gekkyu” and considered the best for drama.

• Also enjoying high ratings is the latest sumo basho. The 15-day events are always broadcast live every afternoon by NHK. But with the sport in decline in recent years, a rating of over 15% is now a rarity even in the closing stages. The highly anticipated return of yokozuna (grand champion) Asashoryu (27), after being suspended for two bashos, saw ratings reach a peak of 23.8% on Monday as the defeated Mongolian left the ring after the final bout of the day.