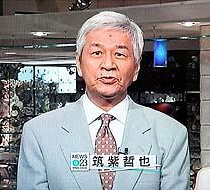 Chikushi Testsuya has formally announced his retirement as main anchor on the TBS “News 23” show, and a replacement has been named. Current Kyodo News managing editor Goto Kenji (58) is expected to take over the role within the year. The program’s official name will remain as “Chikushi Tetsuya News 23” for the time being and Chikushi (72), who is still undergoing treatment for lung cancer, will make occasional appearances as a “special anchor”. After 18 years hosting the late-night news show, he announced that he had cancer in mid-May and it was almost five months before he appeared on the screen again on October 8. He looked leaner and admitted to wearing a hairpiece. Goto, who joined Kyodo in 1973, spent about a year as a guest commentator on TBS news shows from the spring of 2005 before being promoted to managing editor at the major news agency. He will quit on October 31 and plans to take on his new TV role in December.

• Iwabori Seri (30), a model and the wife of Glay leader Takuro (36), gave birth to their second child, at the beginning of the month. She announced the arrival the baby girl on her blog yesterday. The couple married in 2004 and had a boy in 2005.

• Veteran comedian Haruno Piichiku died of lung cancer at a Tokyo hospital yesterday. He was 82. Real name Naoi Toshihiro, he made his debut as a manzai comedian with the late Ohsawa Mitsuru in 1953 and they renamed themselves Haruno Piichiku-Paachiku in 1959. After they split in 1973, Piichiku started a caricature-based solo act. He was performing on stage as recently as October 6, though his cancer was discovered in early September.