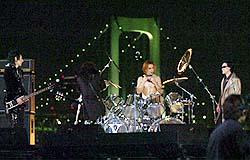 Legendary rock band X Japan took a major step towards their long-awaited comeback yesterday, recording the promo video for their new single. Ten years after they split, the four surviving members of the band were on the Tokyo waterfront to record a live performance on the rooftop of the Aqua City Odaiba mall. The ¥42 million production used helicopters and fire trucks to create artificial rain. Some 10,000 fans gathered to watch the performance on a large screen monitor set up in a nearby car park as leader Yoshiki on drums, Toshi on vocals, Pata on guitar and bassist Heath performed “I.V.”, the all-English theme tune for the Hollywood horror movie “Saw IV” which opens in the U.S. this weekend. The track includes previously un-released guitar tracks made by former lead guitarist Hideto “hide” Matsumoto, who died in a suspected suicide in 1998. Yoshiki was characteristically topless as he showed that he hasn’t lost his frantic drumming style. There had been plans to meet with fans in a nearby hall after the recording, but the crowd was just too big. Speaking to fans via the monitor, Yoshiki remembered hide, “What I really wanted was for us to make our world debut with hide. But seeing as you’ve all taken the trouble to come here tonight, we’re going to play a concert in Tokyo next spring!”

• Health problem have once again forced singer songwriter Yoshida Takuro (61) to cancel a string of concerts in his nationwide tour. He postponed 8 shows from the end of August after coming down with asthmatic bronchitis, but was thought to have made a full recovery and played six shows up to October 17. But he was told by his doctor that he has acute bronchitis and a lung infection and needs to rest for three months. This means calling off the remaining 19 shows, which had been scheduled between today and January 23.

• Police have sent the recent traffic accident case against former Morning Musume member Abe Natsumi (26) to prosecutors. She hit a motorcyclist while pulling out of a car park on the evening of October 7, causing minor injuries to the 33-year-old rider.

• Yamada Shinji, a singer and movie star during the 1950s and 60s, died yesterday of pneumonitis at a Tokyo hospital. He was 70. He had his biggest hit with “Aishuu no Machi ni Kiri ga Furu” in 1959.

• Talento Aoki Sayaka (34) is engaged to be married to a 31-year-old dancer. She made the revelation in an interview in today’s issue of women’s weekly “Josei Jishin” and has written about the romance in her autobiography “34”, which goes on sale this week. Aoki made her name in the last few years as a solo comedienne with a short fuse and is now one of the most familiar faces on the variety show circuit.

• Actor Tamaki Hiroshi (27) and singer Shimatani Hitomi (27) are the latest young showbiz couple. Their romance was also revealed in today’s “Josei Jishin”. They have both worked with the same record label and are said to have started dating at the beginning of September. Tamaki’s agency made no comment on the story, but Shimatani’s management acknowledged the relationship.

• Mihimaru GT vocalist Hiroko (23) has teamed up with breakthrough reggae singer Kusuo (28) on the new single “Tegami”. The two friends co-wrote the song, which will be released on iTunes tomorrow. Kusuo raised his profile this summer when his mini album “Koi ga Ore Desubai”, released in June, held the No.1 spot on the Oricon indie chart for five weeks.