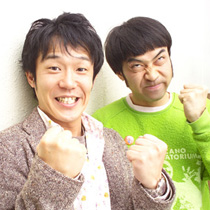 Yesterday, comedian Wakki (photo right) was put on the spot during a live variety show and admitted that he is engaged to be married. The news came during the live 3-hour “London Hearts” special on TV Asahi last night, when the show’s hosts, duo London Boots, and Wakki’s comic partner Nakagawa “Hide” Hideki (36, photo left), who got hitched in July, made an unannounced visit to his home. His fiancee Ayumi, a 33-year-old Tokyo resident, was interviewed but only through a frosted glass window. The couple met eight years ago when Ayumi was working as the emcee for an event in Yokohama. They plan to register their marriage on October 13 but have no immediate plans for a wedding ceremony or reception. One half of the popular Yoshimoto comedy duo Penalty, Wakki (35, real name Wakita Yasuhito) met his partner Hide when they played soccer together for the powerhouse Funabashi High School, with whom they won a national championship. Predictably the entertainment headlines are full of references to his having scored a “goal”.

• The new TBS drama series “Utahime” is to use Eric Clapton’s 1996 hit “Change the World” as background music. It’s the first time that Clapton has allowed his music to be used in a Japanese show, and he is said to given his approval after having enjoyed the script. Naturally there is an angle to the story: Clapton is due to release an album of hits, “Lifetime Best”, in December.