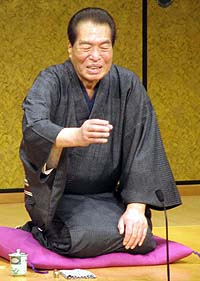 Former rakugoka Sanyutei Enraku (74) is to undergo treatment for cancer, it was revealed yesterday. During a medical checkup at the beginning of the month, an endoscopy discovered a cancer tumor in his stomach. He is currently undergoing further tests at the Keio Hospital to decide if surgery is required. After a career of more than 50 years, Enraku announced his retirement from the stage due to poor health back in February. Best known as the host of popular and long-running NHK show “Shoten”, he was hospitalized with a brain hemorrhage in October 2005 and made his comeback to the stage a year later. He has also been undergoing dialysis treatment for nine years and his combined health problems forced him to pass on the baton at “Shoten” last year after 40 years as a performer and host on the traditional comedy show.

• Thursday’s broadcast of the WBC Flyweight title bout between Kameda Daiki (18) and champion Naito Daisuke (33) drew an impressive audience rating of 28% in the Kanto region. In Kansai, home of the Kameda boxing brothers, the rating was higher still at 32.3%, reaching a peak of over 40% as the judges’ announced their decision: 3-0 for Naito, who won the title in July. The first-ever loss leaves Kameda, middle of three brothers, with a record of 10-1-0 (7 KOs). TBS said that they had over 1,000 complaints after the bout, mostly complaining that the buildup to the fight was too long and that the commentators were too focused on Kameda. But such is the huge hype surrounding the brothers, none of whom have yet to win outside Japan. Eldest brother Koki (20) has a 16-0 record and is scheduled to fight on October 25, though no opponent has yet been named. Youngest brother Tomoki (16) aims to turn pro next summer.