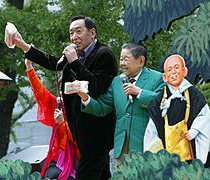 An estimated one and a quarter million people turned out in Osaka yesterday for the annual parade to commemorate the 1937 opening of the city’s main Midousuji street. The highlight of the parade was a float carrying veteran actors Fukita Makoto (74) and Shiraki Minoru (73). The pair starred in the hugely popular 1960’s comedy series “Tenamonya Sandogasa”, which was made by Osaka’s ABC TV and sponsored by local confectioner Maeda Seika. To the delight of residents, they held up packets of Maeda’s famous crackers and shouted out the famous catchphrase, “Ore ga konna ni tsuyoi nomo, atari Maeda no kurakkaa”. The show was also closely tied to the local Yoshimoto Kogyo comedy talent agency, to which the diminutive Shiraki belonged. In the 25 years since it started in 1983, the event has occasionally been used as the victory parade when a local baseball team has won the Japan Series, though it’s only happened three times: the Nakai Hawks in 1959 and the Hanshin Tigers in 2003 and 2005.

• Some 300 fans turned out at Haneda Airport to greet popular Korean actress Choi Ji Woo (32). She’s in Tokyo to promote the drama series “Air City”, which airs on Wowow from October 26. The suspense drama is set in Seoul Airport and is Choi’s first starring role in four years.

• Also in Tokyo over the weekend was Oscar winner Jamie Foxx (39), here to promote his latest movie “Kingdom”, which opened at Roppongi Hills on Saturday. It was his second visit to Japan as an actor, the first being to promote “Any Given Sunday” in 2000. But he revealed that he had been in Japan before that, performing stand up comedy on U.S. military bases in Okinawa about nine years ago.

• KAT-TUN member Akanishi Jin (22) has his first drama starring role in the upcoming “Yuukan Kurabbu” (The Leisure Club). Based on the long-running girl’s manga, it tells of six high schoolers who get caught up in various adventures. The show’s theme tune, “Keep the Faith”, was written by former Boowy vocalist Himuro Kyosuke and is performed by KAT-TUN. Akanishi, one of the more popular young Johnny’s Jimusho stars, is making his first drama appearance in almost two and a half years, a period during which he took off to the U.S. to study for six months.

• Rakugo performer Motoya Izumi (33) continues to deny rumors of a split with his wife, former actress Hano Aki (39). She and their two children are said to have moved in with her mother since last month. Motoya, his two sisters, and his overbearing mother have been through a series of scandals over the last few years.