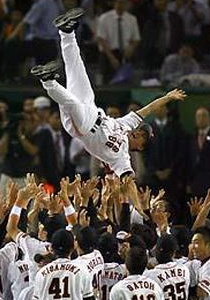 For fans of the Yomiuri Giants, even a 5-year wait for a league championship is a long, long time. Japan’s most popular baseball team (at least when they’re winning) clinched the Central League title yesterday but for the first time ever NTV didn’t cover the event with a full live broadcast. The network has been cutting back on the number of live Giants games as both baseball and the country’s most storied team have gone through a slump. Last night’s 5-4 sayonara win against cross-town rivals the Yakult Swallows was shown on satellite channels but only when the Giants players hoisted manager Hara Tatsunori in the traditional “doage” did NTV show the event live using an on-screen insert. About 15 minutes later, they broke with scheduled programming and showed a brief 10 minutes of highlights. Several celebrities known to be die-hard Giants fans were in celebratory mood, including SMAP leader Nakai Masahiro (35), kabuki actor Ichikawa Somegoro (34) and freelance announcer Tokumitsu Kazuo (66). The Giants still have to navigate the newly named Climax Series, playoffs between the league’s top 3 finishers to decide who will compete against the top Pacific League team in the Japan Series. The PL playoffs start on October 8, the CL series on October 13, and the Japan Series on October 27.

• The media fuss about actress Sawajiri Erika (21) has died down a bit since she apologized for her recent grumpy behavior. If you haven’t seen the video of last Friday’s premiere of her new movie, it’s definitely worth a look.