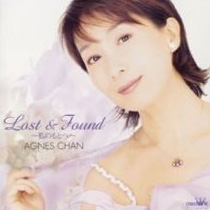 Singer Agnes Chan (52) underwent surgery on Monday for breast cancer. According to a statement released by her management agency yesterday, the surgery was a success. Though she has canceled a series of concerts and lectures scheduled for the next few days, they say she plans to be back at work on October 9. The tumor was discovered in mid-September and was found to be in its early stages. Full name, Agnes Miling Kaneko Chan, the Chinese singer started her singing and acting career in Hong Kong in the early 1970s but soon found even greater success in Japan, where she debuted in 1972. She married her former manager, Tsutomu Kaneko, in 1986 but continued working after giving birth to her first child. Her decision to bring her infant son with her to work was seen at the time as highly controversial and led to the first widespread debate on the issue of working mothers. A Christian, Chan is an essayist, novelist, university lecturer and UNICEF ambassador.

• And on the same theme, talento Takagi Miho (45) is to make her return to acting for the first time in 12 years in a drama about three women in their 40s and one’s struggle with breast cancer. “Hitogata Nagashi” is based on the novel of the same name and stars Sawaguchi Yasuko (42) as a TV announcer, while Takagi and Matsuda Miyuki (45) complete a trio of friends. All three actresses had their heyday in the 1980s, with Matsuda getting married young to legendary actor Matsuda Yusaku (1949-89). Their two sons are now up and coming actors in their 20s. Takagi says she is leaving the running of her family’s farm in Nasu, Tochigi Prefecture to her father while she is filming the drama. Apart from her rural work, she has been a regular on afternoon and variety shows for several years. The new 3-part series airs on NHK from December 1.

• Singer Mori Masako (48) has canceled all planned concert in October and November due to her health problems. As we reported here about a week ago, she was hospitalized with acute pneumonia but was expected to be back on stage within a month. But with a mostly empty schedule in December, it’s clear that she will be taking off the next several months to fully recover.

• Former sumo Yokozuna (Grand Champion) Hanada Masaru (36) and his wife Mieko (38) got divorced on Tuesday, the pair revealed to the media yesterday. They had been separated for the last five years. They got married in 1994 when Hanada, fighting under the ring name Wakanohana, and his younger brother were at the peak of the Waka-Taka boom. The brothers were national heroes and Mieko, a model and JAL flight attendant, was seen as the right kind of match. They had four children stop-leukemia-info.com, but cracks started to appear after Hanada retired from sumo in 2000, tried his hand at American football and showbiz and was caught up in rumors of womanizing. He has recently become successful in the food industry and currently runs almost 30 restaurants. According to a magazine interview published today, Mieko says her ex wants to live like comedian Akashiya Sanma (52): one of Japan’s most popular stars, the divorcee often jokes about his ex-wife, actress Ohtake Shinobu (50), and makes no secret of his constant philandering.

• In the first event of the 47th Miss International pageant, which takes place in Tokyo up to October 15, local actress Shirata Hisako (25) was chosen by reporters yesterday as Miss Photogenic. Beauties from 60 countries are aiming to win the coveted title currently held by Daniela Di Giacomo of Venezuela.