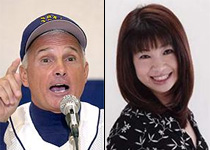 Orix Buffaloes manager Terry Collins (58) didn’t have a good first season in Japanese baseball but he did find love. In a recent meeting with pitcher Miyamoto Daisuke (26) at fall training, the divorcee acknowledged his relationship with Yoshimoto Kogyo talento Silk (44, real name Kasatani Ayako). It was the first time he had spoken about the relationship since it was first rumored back in June. A former manager of the Houston Astros and the Anaheim Angels, Collins arrived in Japan in January on a 3-year contract to manage the Buffaloes. They ended the season in the Pacific League cellar. Miyamoto married another Yoshimoto comedienne, Unabara Yasuyo (31), in 2005 and is currently making a return from the Orix farm system. He continues to recover from a condition known as ossification of the yellow ligament, a problem that has ended the career of many players.

• The 20th Tokyo International Film Festival wound up Sunday with “The Band’s Visit,” a joint French-Israeli production directed by Eran Kolirin, taking the Tokyo Sakura Grand Prix and $50,000 prize money. It tells the tale of an Egyptian police band that gets lost while visiting a small town in the desert in Israel and of the members’ exchanges with the local people. Other winners: the Special Jury Prize – “The Western Trunk Line”, directed by Li Jixian; Best Director – Peter Howitt for “Dangerous Parking”; Best Actress – Shefali Shah in “Gandhi My Father”; Best Actor – Damian Ul in “Tricks.” The Audience Award went to “Leroy” by director Armin Voelckers.

• Johnny’s Jimusho veteran Masahiko Kondo (43) became a father for the first time earlier in the month, he revealed last Friday. He and his wife Atsuko (41) married in 1994, and had been through years of miscarriages and infertility treatment. They finally had an addition to the family at a Tokyo hospital on the afternoon of October 8. Kondo, who has largely swapped singing for a career as a racing driver and team owner, rushed to the hospital from a pre-scheduled traffic safety event on the day, but missed his son’s arrival by less than five minutes. They named him Gousuke, using a kanji that is made up of three “cars”. The boy was born two months premature and is in an incubator – his father has yet to have a chance to hold him – but is said to be developing well.