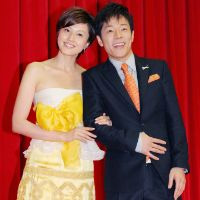 Actress Fujiwara Norika (35) and Yoshimoto comedian Jinnai Tomonori (32) have finally made their engagement “public”. Late Tuesday night, the pair appeared together in public for the first time since rumors of an engagement first surfaced more than a month ago, and yesterday Fujiwara acknowledged it for the first time on her blog. She also explained why they have chosen to get married at Ikuta Jinja shrine in Kobe. Both celebrities hail from the city and the shrine is where Fujiwara attended her high school graduation party. Jinnai is also an annual visitor to the shrine, which was rebuilt after it was badly damaged in the Great Hanshin-Awaji Earthquake of 1995.

• Rock vocalist Matohara Naoto has revealed that he recently got married. The front man for rock quartet Under Graph announced his marriage on the band’s official website yesterday. He gave no mention of his new bride’s age or what she does, but said they had been together from the band’s indie days. The members started playing together in 1997, though Matohara and guitarist Asa Ryosuke have known each other since 1982 when both were in kindergarten, and they formed the band in 2000. They made their major label debut with For Life Records in 2004. Their first single, “Tsubasa”, made the Oricon Top 10 in its 20th week of release.

• Actor Fujiki Naohito (34) is a father. His wife gave birth to their first child in mid-December and they registered the birth yesterday. The couple married at the end of last year after a long relationship.