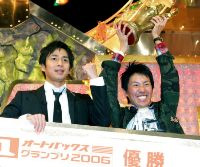 Manzai duo Tutorial are the new kings of comedy. Yesterday, they won the M-1 Grand Prix, an annual knockout competition to decide the best up-and-coming comedy act in the country. After a series of events to whittle down the original 3,922 acts, the final was televised live from TV Asahi’s studios in downtown Tokyo. With Tokui Yoshimi (31) as the “boke” (funny man) and Fukuda Mitsunori (31) as the “tsukomi” (straight man), the duo debuted in 1998. Like many of Japan’s top comedy acts, they hail from the Kansai region and speak in the its distinctive Kansai-ben dialect. Among the panel of judges for the event was top comedian Shimada Shinsuke (50), who described the pair’s act as “perfect”. Equally impressed was Downtown‘s Matsumoto Hitoshi (43) who said they were so good that “they probably knew they were going to win”. The duo won ¥10 million in prize money and will undoubtedly see a lot more TV work coming their way.

• Talento Wakatsuki Chinatsu (22) returned to work on Saturday. She had been convalescing after suffering from exhaustion and stress due to a heavy workload. Also making a recovery is veteran comedian Kato Cha (63), who is due to leave hospital today. He had been undergoing treatment since the end of October, though the nature of his ailment has not been made public. Meanwhile, actress Tsuchiya Anna (22) came down with the nasty Norovirus over the weekend, causing her to cancel much of her planned work schedule. Though she has yet to recover fully, she attended seven different events to promote her upcoming movie “Sakuran”.

• The Tokyo home of singer/songwriter Furuuchi Toko (34) was broken into at the end of last week. Several watches and items of jewelry worth about ¥600,000 were stolen.