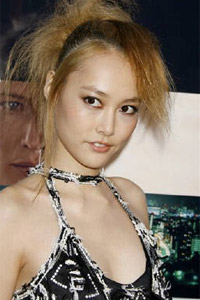 Good news for Japan’s Hollywood dreamers. On Wednesday, the National Board of Review in New York named Clint Eastwood’s “Letters from Iwo Jima” this year’s best picture, and newcomer Kikuchi Rinko (photo, 25) was recognized for her role in “Babel”. The success of “Letters…” in the first of the year’s movie awards could herald a big award season ahead for the gritty WWII tale and star Watanabe Ken (47). Though an established Japanese star, surprisingly this is his first leading movie role. His career took off after he was nominated for an Academy Award in 2003 for his supporting role in “The Last Samurai”. This time, he may be up against the likes of Forest Whitaker, who took the best actor award Wednesday for his portrayal of the late Ugandan dictator Idi Amin in “The Last King of Scotland”. Pretty much an unknown at home, Kikuchi shared the female Breakthrough Performance award with Jennifer Hudson of “Dreamgirls”. Her performance as Chieko, a deaf mute high school girl dealing with her budding sexuality and her mother’s suicide, has been described as “extraordinary and brave” and “compelling”. The Brad Pitt-Cate Blanchett vehicle also stars the excellent Yakusho Koji as Chieko’s father. Also at the award ceremony in New York were “Letters…” cast members including Ihara Tsuyoshi (43), kabuki actor Nakamura Shido (34), and Ninomiya Kazunari (23). Johnny’s Jimusho idol Ninomiya’s performance was singled out by many in the U.S., and he is considered a dark horse candidate for an Oscar. The movie’s companion piece, “Flags of Our Fathers”, was also chosen among the best 10 movies of the year.

• Popular actress Zaizen Naomi (40) gave birth to her first child, a baby boy, at a Tokyo hospital yesterday. She and Fuji TV producer Honma Ouhiko (43) have been married since 2003.