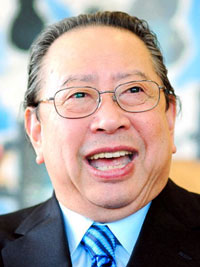 Nagayama Takeomi, chairman of Shochiku and the man who raised kabuki from the postwar ashes, died yesterday from leukemia at a Tokyo hospital. He was 81. Recognized by the government for his outstanding cultural contributions and a recipient of the Kikuchi Kan prize, Nagayama first joined Shochiku in 1947 while still a university student. He started in the management of the Kabukiza theater in Tokyo. He was a director of the movie and theater company by the age of 42 and became president in 1984. Among his friends and collaborators were author Mishima Yukio, a high-school classmate, a just about every kabuki star of the postwar period. He also helped raised the profile of kabuki abroad, bringing it to the U.S. (1960) and the former Soviet Union (1961) for the first time. He was also involved in many other forms of theater, from the avant garde to musicals. Among the latest Shochiku movie projects are Yamada Yoji‘s much-anticipated samurai drama, “Bushi no Ichibun”, and the domestic release of “Lassie”. The company runs the country’s four main kabuki theaters in Tokyo, Osaka and Kyoto.

• The Broadcast Film Critics Association on Tuesday named Kikuchi Rinko (25) as one of six nominees for their best supporting actress award. Last weekend, Kikuchi was named by the National Board of Review in New York as the winner of their female Breakthrough Performance award for her role in the Japanese segment of “Babel”. She shared that award with Jennifer Hudson of “Dreamgirls”. Her performance as Chieko, a deaf mute high school girl dealing with her budding sexuality and her mother’s suicide, has been described as “extraordinary and brave” and “compelling”. The Brad Pitt-Cate Blanchett vehicle also stars the always excellent Yakusho Koji as Chieko’s father.