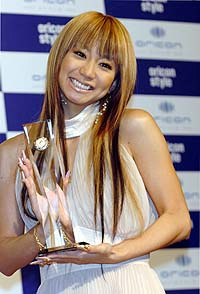 Sexy songstress Koda Kumi (24) has had an amazing year. And chart company Oricon have recognized that, awarding her the trophy for the artist with the biggest sales for 2006. With 12 consecutive Top 10 singles and her second greatest hits album, she amassed a whopping ¥12.7 billion in sales for the year. It proves that she is a real contender for the title of Japan’s top female artist. Her main rival remains Avex label-mate and sempai Hamasaki Ayumi, the last female artist to break the ¥10-billion mark in 2003. Koda is in the sixth year of her career, which started out in the club scene. She has built a reputation largely through branding herself as a sex symbol, helping create the new adjective “ero-kakkoii” (sexy cool).

• Visual-kei musician and producer Matsuura Tadashi (30) has been penalized for tax evasion by the Wakayama Prefectural District Court. Over the last three years he is said to have underpaid by ¥46 million in income tax. Performing under the stage name Kisaki, Matsuura is the leader of the band Phantasmagoria. He said in a statement that the band’s popularity has been on the decline, and he tried to avoid paying taxes to protect his financial future. With penalties, Matsuura has been ordered to pay ¥64 million to tax authorities.

• Hip hop group Rip Slyme performed a free concert for 10,000 fans at the Nippon Budokan yesterday. They were joined on stage by m-flo’s Verbal and rap group Schadaraparr, who took part in their latest album “Epoch”. Also making a comeback was member DJ Fumiya, who took a year off to recover from a nervous condition known as autonomic ataxia. Rip Slyme played a similar free gig at the venerable venue back in 2002.