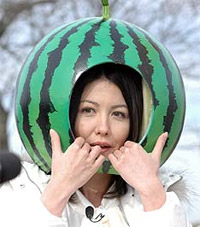 Newscaster Yamamoto Mona (30) just wants to put the scandal behind her. She got back to work this week for the first time since her affair with a married politician hit the headlines two months ago. At the time, she had just got her big break and joined the panel of the TBS late-night news show, “News23”, hosted by veteran Chikushi Tetsuya (71). The scandal meant she had to step down from the post after less than a week on the show. The man who brought her back from the edge of professional oblivion was Kitano “Beat” Takeshi (59), whose Office Kitano represents Yamamoto. The comedian invited her to take part in his “20-kai Beat Takeshi no Warai Ultra Quiz”, a popular quiz-variety show from the 90s that makes its comeback after ten years on New Year’s Day. Probably the humiliation that is par for the course on the show – which in this case includes wearing a giant Watermelon head – will be seen as suitable punishment for her wayward behavior.

• Talento Carousel Maki (64) returned to her Tokyo home late Thursday night to find it ransacked. The house in Tokyo’s Meguro Ward had been burglarized and ¥8 million-worth of jewelry and ¥3 million in cash had been stolen. The house was broken into through a first floor veranda door, and a safe on the second was forced open. Born Hirahara Tetsuo in Hokkaido, she underwent a sex change operation in Morocco in 1973. But it wasn’t until 2004 that she was legally recognized as a woman with the name Hirahara Maki. The stage name Carousel comes from the name of a gay bar in Osaka where she once worked.

• Model/actress Kawahara Ayako (35) is romantically involved with a 46-year-old music producer, according to weekly magazine Friday. The divorcee and father of two was the man behind SMAP’s 1998 mega-hit “Yozora no Mukou”.