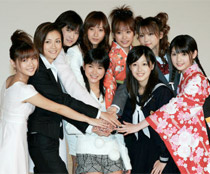 Welcome to Morning Musume version 8.0. 13-year old Mitsui Aika (photo center) is latest member to join the ever-changing lineup of one of the most successful J-pop projects of all time. She was chosen from thousands of hopefuls in the 8th round of auditions, bringing the group to a total of nine members. Mitsui will not take part in the group’s planned Kohaku appearance on New Year’s Eve, but will join them formally for their spring concerts.

Actress Fujiwara Norika (35) and Yoshimoto funny man Jinnai Tomonori (32) have taken the first official step in their much publicized wedding plans. Though they have yet to make a public announcement, they took part in a traditional “yuinou” engagement ceremony at the Ikuta Jinja shrine in Kobe yesterday.Both families held a traditional exchange of gifts and cash. The gifts, in odd numbers of 5, 7 or more, are food items and other things thought to bring happiness and good fortune. The money involved is usually 2 to 3 times a company employee’s monthly salary. With Jinnai estimated to make about ¥50 million a year, pundits have speculated that ¥100 million would be a suitably round figure! Over 100 fans mingled with dozens of reporters and TV cameras at the shrine hoping for a glimpse of the stars, who used “doubles” and several cars to throw people off the scent. Signs saying “Closed for construction” were placed on the gates to the shrine. Since the yuinou ceremony took place there, tradition dictates that Ikuta Jinja will also be the venue for their wedding ceremony, and February 25 is thought to be the most likely date (also happens to be my birthday – how much more fortuitous can you get!). The shrine has a history that goes back as far as 201AD, though it was largely rebuilt after the Great Hanshin Earthquake in 1995.

• Rock musician Awanokoji Sho got married on Thursday. He made the announcement on his official blog on Friday night, adding that his bride was an “ordinary person” (the usual expression for someone not in showbiz) that he met earlier in the year in London. He said they hope to hold a wedding ceremony next June. Awanokoji, vocalist of the six-member “yankee rock” band Kishiden, has recently found chart success as DJ Ozma and he is currently on a solo tour. In 2003, he was romantically linked with Puffy member Yoshimura Yumi (31), but they broke up at the end of last year.