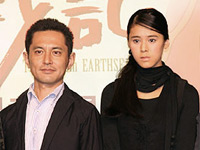 Young singer Teshima Aoi (19) made her live debut at the Ghibli Museum yesterday. The teen, who was chosen to sing the title song and voice the heroine’s role for Studio Ghibli’s summer hit “Gedo Senki” (Tales from Earthsea), was accompanied on piano by Taniyama Hiroko, who wrote the song, “Teru no Uta”. The single sold about 300,000 copies. Teshima was clearly nervous as she performed 11 songs before a small audience of 120 at the museum in western Tokyo. When the movie’s director, Miyazaki Goro (39), shared the stage with her, Taniyama joked that it was like an omiai, or arranged wedding meeting. The son of anime legend Miyazaki Hayao (65), Goro took over the reins from his father for the first time to bring this project to the big screen. Inevitably compared to his father’s work, the movie got mixed reviews and the box office failed to reach the initial target of ¥10 billion. The movie has been shown in East Asia and is set for release in some 50 countries worldwide. Under contract terms, it will not appear on U.S. TV until 2009.

• Mother and son on stage together for the first time. Actress Matsuda Miyuki (45) and actor Matsuda Ryuhei (23) appeared together at a PR event for “Sekai wa Tokidoki Utsukushii” (Life Can Be So Wonderful), a ‘cinema poem’ in five parts directed by Minorikawa Osamu. The widow and son of screen legend Matsuda Yusaku don’t actually share any screen time in the collection of short stories. The film, due for release next spring, got less than enthusiastic reviews at this year’s Tokyo International Film Festival.