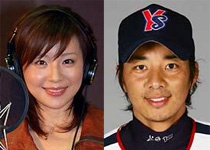 TV Tokyo’s Ohashi Miho (28) had an announcement of a different kind on Sunday. She faxed the media to announce that she and Yakult Swallows infielder Shiroishi Noriyuki (33) got engaged on Saturday. The couple have been dating for about three years, and their relationship was revealed in one of the weekly magazines in 2004. They are expected to register their marriage early next year, but with spring training looming soon afterwards, a wedding is unlikely until after the baseball season ends. Ohashi, a former beauty queen at Sophia University, is a popular presenter on the TV Tokyo show “Sports Tamashii” as well as several variety shows. She worked as a reporter for the Athens Olympics as well as this year’s World Baseball Classic in the U.S. and the World Cup in Germany. She says she plans to continue working after marriage and is aiming to report on the Beijing Olympics in 2008. Shiroishi is a graduate of Aoyama University and joined the Nippon Ham Fighters in the 1994 draft. He was traded to Yakult in 1998. It almost seems like the default marriage partner for a pro babseball player is a popular TV announcer. Some of the more famous examples include Japan’s ace and newly-signed Red Sox pitcher Matsuzaka Daisuke and his wife, Shibata Tomoyo; former L.A. Dodgers pitcher Ishii Kazuhisa and Kisa Ayako; and Seattle Mariners star Ichiro and Fukushima Yumiko.

Beauty and the Beast
Love & Laughter