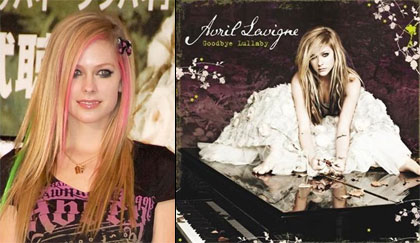 Canadian rock star Avril Lavigne (26) was in Tokyo yesterday to give some of her Japanese fans the world’s first glimpse of her upcoming album. “Goodbye Lullaby” will be released in Japan before anywhere else on March 2. So in order to keep the album master tape secure – and no doubt partly as a publicity stunt – yesterday’s “listening party” was held at the central Tokyo offices of security company Secom. 50 lucky fans were selected by lottery to attend the event, Lavigne’s first appearance in Japan in more than two years. In addition to hearing five tracks from the album (“Push”, “Everybody Hurts”, “Goodbye”, “Smile”, and “Wish You Were Here”), they got the first look at the promo video for the first single release, “What the Hell.”

Lavigne has sold more than five million albums in this country, a good chunk of her global 40 million in sales. Among her Twitter posts about her her latest visit were, “On my way now to my album listening party….so excited to see all my Japanese fans tonight!!!!” and “Nothing like a traditional cup of green tea in Japan to help with the jet lag. Yummy too.” She said she’ll be back in Japan for the album release in March.

Manzai Pioneer Itoshi Dies
A Rough Start to the Year