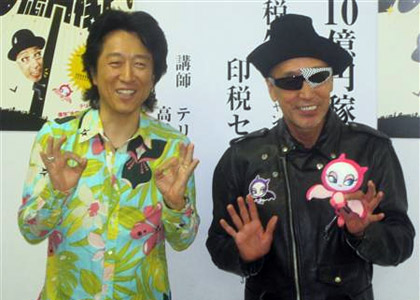 Producer and TV regular Terry Ito (60, photo right) appeared at a PR event in Tokyo yesterday to promote his latest movie project. “10-okuen Kasegu” (Earn ¥1 Billion” is a documentary about Ito’s efforts to make a fortune from royalties. The movie will be released in Tokyo cinemas on November 20.

Ito started out with ¥3 million (about $36,000) in funds for his project. Deciding to invest it in the cartoon character business, he had an unknown designer come up with an original character design and then set out to sign licensing agreements. By August, the pink bat Nanity was the basis of 16 contracts with Japanese companies and another 11 overseas.

A special guest at yesterday’s event was musician Takahashi Joji (52, photo left), guitarist and vocalist with the rock band The Trabryu. The band made their breakthrough with the mega-hit “Road” in 1993. The single sold 2.2 million copies, earning Takahashi about ¥1.6 billion in royalties. He said that he spent most of that money in the space of a couple of years. But he still earns ¥7 every time someone sings the song at karaoke. And it adds up, as he reckons he makes about ¥12 million a year in royalties alone. Takahashi is married to actress Mifune Mika (28), daughter of the screen legend Mifune Toshiro (1920-1997).