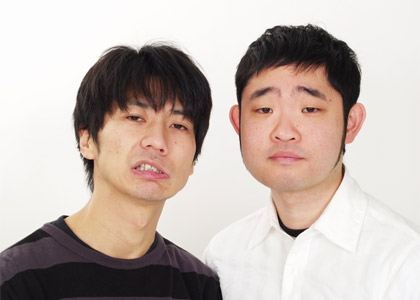 Manzai duo King of Comedy are living up to their name. The pair won the final round of the annual “King of Conto 2010” comedy battle on TBS last night. They took home ¥10 million in prize money, though they jokingly complained that their management agency will be taking 40%. Asked how he would use his share, Takahashi Kenichi (39) said he would help pay off his father’s debts. “But we need to win this another eight times…” Takahashi is the tsukkomi of the duo, and his boke partner is Konno Hiroshi (31).

The competition, one of several that have become popular over the last couple of years, had 3009 acts vying for the prize money and the exposure that can help an up-and-coming act make a breakthrough. King of Comedy are already pretty established and in the 10th year of their career. They followed the example of sempai duo Untouchable in borrowing their stage name from the title of a Robert De Niro movie. Takahashi was arrested in 2007 for allegedly groping a female passenger on a Tokyo subway train, though the case was never taken to court.

The Japanese word “conto” comes from the French “conte” and is used to describe a comedy skit or routine.