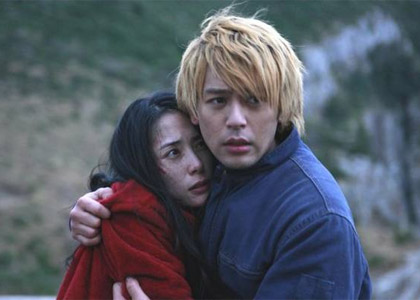 Fukatsu Eri (37) has won the Best Actress award at the 34th Montreal World Film Festival for her role in the movie “Akunin” (Villain). On Monday she thanked the festival in three languages, saying “Arigato, merci beaucoup, thank you so much.” Modest as always, she added, “I think this is an award given to the (movie’s) entire staff. I am very happy.” Fukatsu was in Canada along with the film’s director, Lee Sang Il (36), and Tsumabuki Satoshi (29, photo right), who played the title role. The movie was screened on the second-to-last day and received a standing ovation. It is scheduled for release in Japan on September 11.

Fukatsu is just the second Japanese actress to win the award and the first since Tanaka Yuko (55), who starred in “Amagi Goe” in 1983. But Japanese movies have been doing well at the festival in the last couple of years. Okuda Eiji’s “Nagai Sanpo” (A Long Walk) won the Grand Prix in 2006 and two year’s later Takita Yojiro’s “Okuribito” (Departures) took the top award. And Terajima Shinobu (37) won the Best Actress award at this year’s Berlin International Film Festival for her role in “Caterpillar.”