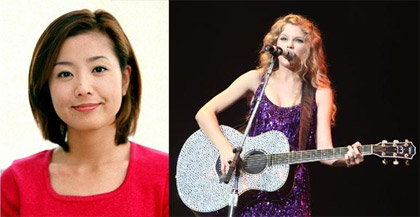 Former Fuji TV announcer Kikuma Yukino (38) has passed the bar exam at the second attempt. The Ministry of Justice yesterday announced the names of those who had passed the exam, which along with the exam for certified public accountants is considered the most difficult in Japan. Up to 2006, the pass rate was as low as 3% and in order to deal with a shortage of lawyers nationwide the exam system was revamped. The pass rate this year was a little over 25%, the lowest under the new system. At a reception to honor those who passed this year’s exam, Kikuma said, “I learned that if you make the effort and do your best, good things will happen. I’m even more delighted than when I was recruited to enter Fuji TV!”

While still working on TV, she attended Omiya Law School but the intense schedule led to stress and health problems. She quit Fuji TV in 2007 to focus on her studies. After she failed the exam last year, she started getting up at 6am every day and putting in 16-17 hours of study a day before the exam in May. She will undergo legal training from November.

One of Kikuma’s most famous episodes came while she was a presenter on the “Mezamashi Terebi” show in 1998. On the live show, she fell from a 5th-storey window while demonstrating emergency escape equipment and ended up in the hospital for three months. Another infamous case was where she was involved in an underage drinking incident with a member of the Johnny’s Jimusho boy aidoru band NEWS.

Taylor Swift to Kick Off World Tour in Japan
Universal Japan announced yesterday that Grammy Award-winning country music singer Taylor Swift (20) is to start her first world tour in Japan next February. The first show in the 18-country tour will be on February 13 at the Osaka Castle Hall. That will be followed by two shows at the Nippon Budokan in Tokyo and then another 80+ shows worldwide. Commenting on the plan to kick off the tour in Japan, she said, “It’s my Valentine’s Day present.” Swift performed in Tokyo on Valentine’s Day this year. Her 2008 debut album “Fearless” spent 11 weeks atop the US charts.