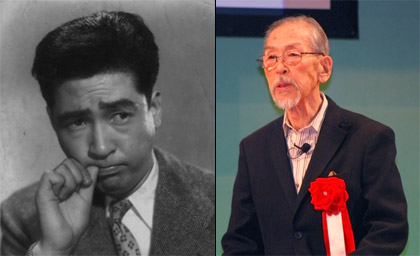 Japan lost another of its favorite veteran actors yesterday when Kobayashi Keiju passed away of heart failure at a Tokyo hospital. He was 86. Over a career that spanned almost seven decades, he appeared in about 260 movies and TV dramas playing everything from the prime minister in “Godzilla 1985” to detective Muta Ichiro in a long-running TV series. His lifetime achievements and cultural contributions were recognized by the nation in the form of medals of honor from the government. His final public appearance was last November, at the funeral of actor Morishige Hisaya, with whom he did some of his most famous work.

Kobayashi made a couple of propaganda movies after joining the Nikkatsu studio in 1942, before moving to the Daiei studio. With his man-next-door personality, he became popular in the 1950s starring in a series of “salaryman” (company employee) comedies for the Toho studio. In the “Shacho” (company president) series of more than 30 movies between 1956-71, he played the serious secretary to Morishige’s less than serious boss. The series more than any other shaped the image of the corporate warriors who rebuilt Japan from the ashes of WWII. Most of his award-winning work was in the late 1950s or 60s, but he continued to work in movies and on TV until recent years.