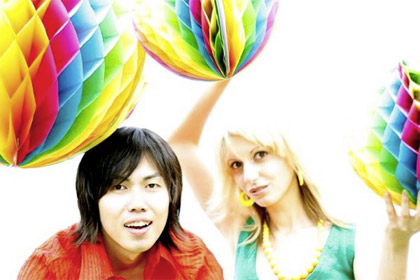 You may not have heard of the rock duo Layla Lane, but you may have heard their music. Shizuoka native Heday (29) on guitar and Valerie (27) from Los Angeles on piano and vocals have caused a buzz in Japan with their song “Happy Lane.” The song has been used in an ongoing Coca Cola commercial campaign since April, and the company has received over 1,000 inquiries asking who is performing it. The growing buzz in Japan over the summer was heightened when the duo came to do a short tour. Now it’s been decided to give the duo their break and they will release their major label debut single on October 13. The duo describe their music on their website as combining “exquisite arrangements and clever harmonies for a style that is equal parts 1960’s pop, gypsy swing, and good old-fashioned rock n’ roll.”

Heday (real name Ikumo Hidehito) first headed to the U.S. at the age of 19 to study music at UCLA, where he graduated in 2007. He caught the eye of drummer and Beatles collaborator Jim Keltner (68), and found himself doing session work with Ringo Starr (67) and the Eagles guitarist Joe Walsh (62). The former Beatle was very impressed by his songwriting, guitar, bass and arrangement skills. Heday teamed up with Valerie Stern based largely on their shared interest in the Beatles’ music. Last year, a collaboration with director Ken Ochiai produced an award-winning video for the song “No More,” which also featured in the summer Katherine Heigl-Ashton Kutcher movie “Killers.”