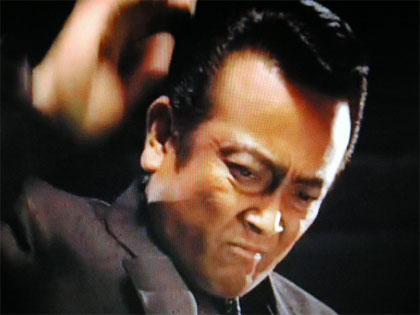 Actor Shimizu Kentaro (57) has been arrested yet again. The organized crime department of the Metropolitan Police announced yesterday that they had arrested the actor on suspicion of the use of “kakuseizai” (stimulant drugs). It is the sixth arrest for Shimizu, who was previously held on drug and reckless driving charges. His criminal record has probably only boosted his image as an on-screen gang boss, in a career that blurs the lines between fiction and reality.

Real name Sonoda Iwao, he was involved in a fatal traffic accident in 1973 and was fined for professional negligence resulting in death. His handsome looks brought him popularity on the youth TV show “Ginza Now” which led to a major hit with his debut single “Shitsuren Restaurant” in 1976. He had several more hits the following year, earning him a best newcomer award and a slot of the NHK “Kohaku Uta Gassen” New Year’s Eve concert. But his career had peaked by the time he was arrested in 1983 for marijuana possession. Marriage to an American model in 1985 was followed by another drug arrest and a career move to the “V Cinema” (straight-to-video) movie business. His marriage ended in 1991 and a third drug arrest in 1994 led to an 18-month prison sentence. The following years saw another return to movies, earning him the nickname “The Emperor of V Cinema,” and brief marriage to a woman 22 years younger and another spell in prison for drug use. His most recent brush with the law was in 2008 when he was arrested for an hit and run incident and received a 7-month prison sentence.