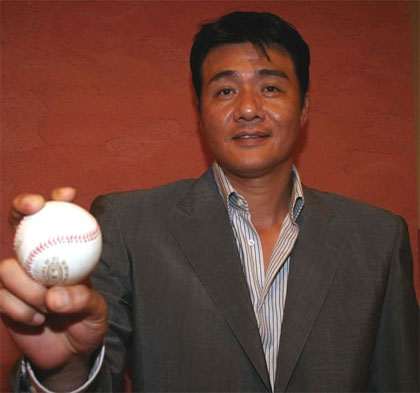 At his regular press conference yesterday, NHK chairman Fukuchi Shigeo (75) said that the public network had no plans to fire sports announcer Yoda Tsuyoshi (44, photo). A weekly gossip magazine recently revealed that the married Yoda was having an affair with a flight attendant, and that she had aborted a pregnancy. Yoda appeared as usual on the “Sunday Sports” show last weekend, after the story was published.

Yoda joined the Chunichi Dragons baseball team as a No.1 draft pick pitcher in 1989 and had a hugely successful first season in 1990. He set a Japan Pro Baseball record with a 157km/h pitch in August of that year, recorded 31 saves, a record for a rookie, and made the All Star game. He was recognized with Rookie of the Year and Best Relief Pitcher awards. But the physical strain of pitching relief took its toll and Yoda never saw the same level of success again. From 1996, he bounced around between several teams until retiring in 2000. He married former TBS announcer Kiba Hiroko (45) in 1992.

Komuro Tetsuya Back in the Studio
Inoue Hisashi Dies at 75