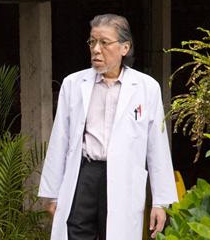 Musician turned actor and fashion designer Oguchi Hiroshi died of cancer at a Tokyo hospital on Sunday night. He was 58. He first found fame as the drummer of 60s band The Tempters. The band were one of the leaders of the so-called Group Sounds movement and had a string of hits, including “Kamisama Onegai” and “Emerald no Densetsu.” After the band split in 1971, Oguchi and other members joined with singer Sawada Kenji (60) to form the supergroup PYG. Oguchi later focused on acting, appearing in such movies as “Kita no Zeronen” and “Nihon Chinbotsu.” He married actress Shingyoji Kimie (49) in 1983, watched his fashion company go bankrupt in 1991, and published a book of nude photos of his wife in 1997. They divorced in 2005 and Oguchi married an acquaintance of his ex-wife the following year. Sources say that Oguchi, a heavy smoker and drinker, had battled C-type hepatitis for several years and was undergoing treatment to prevent it leading to liver cancer. But when his health deteriorated about a year ago, tests revealed that cancer had developed. He was in and out of hospital throughout 2008 but was well enough to put on an exhibition of his art in December. His condition worsened suddenly on metformin-online.com and he never left hospital again. The movie “Kafuu wo Machiwabite,” which he filmed in Okinawa last April, is set to open next month.

• Actress Aso Yumi (44) and actor Nagasawa Toshiya (47) divorced last June, according to today’s issue of weekly magazine “Shuukan Josei.” The couple first met on the set of an NHK morning drama in 2001 and married in March 2004, when Aso was several months pregnant. She has custody of their son, now 4.

• Rock band Kishidan announced on their website yesterday are getting back into action after a break of more than two and a half years. They will be playing two nights at the Nippon Budokan at the end of April and there is also a new album in the works from the Avex label. The six-member band are led by Ayanokoji Sho, who over the last couple of years has been active as his alter ego DJ Ozma. He “retired” that character at the end of last year. Most recently, he released a single as part of the trio Yajima Biyoshitsu with comedy duo Tunnels.

The Fall of the Bikini Model
Four Leaves “Taabo” Dies