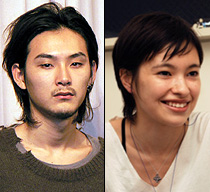 Management for actor Matsuda Ryuhei (25) announced yesterday that he and model Ohta Rina (21) got married on January 11, Ohta’s birthday. They are expecting a baby in the summer, an experience Matsuda will already have portrayed in the upcoming movie “Tsurugidake,” due to open in June. The couple first met through a mutual friend in the autumn of 2007 and soon started dating. The son of actress Matsuda Miyuki and the legendary Matsuda Yusaku (1949-89), Ryuhei won multiple awards at the age of 16 for his first movie starring role in Ohshima Nagisa’s “Gohatto.” His younger brother Shota (23) is also an up-and-coming actor. Ryuhei will no doubt be expected to talk about his big news on January 17, when he is scheduled to appear at a talk show event to promote his current movie “Akumu Tantei 2” (Dream Detective 2). Ohta debuted as a fashion magazine model in 2001. Half Russian on her mother’s side, she has appeared on NHK’s Russian language learning show as well as several movies.

• Talento Yamamoto Mona (30) is getting back to work again. Six months after yet another affair with a married celebrity got her in trouble, she is to return to her weekly job on the Bunka Housou radio network. She was Ohtake Makoto’s co-presenter on the Tuesday edition of his weekday afternoon show since it started in May 2007, but has not appeared since her affair with baseball star Nioka Tomohiro appeared in the media last July. Ohtake is an old friend of Kitano Takeshi, whose Office Kitano management agency represents Yamamoto.

• Management for talento Yasuda Misako (26) and actor Shirota Yu (23) have denied rumors of a romance between the two, insisting they are just friends. The pair have known each other since they played a wild young couple in the 2007 movie “Arakure Knight.” Yasuda was romantically involved with actor Kashiwabara Shuji (30) from the autumn of 2006, but they broke up the following year.