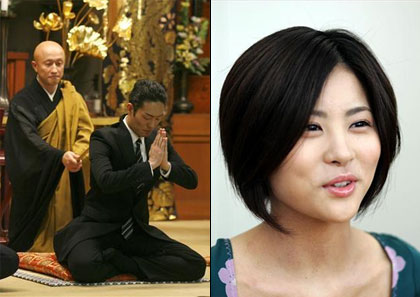 Kabuki actor Nakamura Kantaro (27) yesterday for the first time acknowledged his romantic relationship with actress Maeda Ai (25), and added that they plan to get married in the autumn. The actor was attending a PR event for his latest movie, held at a Shinto shrine in central Tokyo. In “Zen” Nakamura plays the famous monk Dougen (1200-1253). In accordance with tradition, yesterday’s news should not have come out until after the one-year mourning period for Maeda’s mother, who died on January 16 of last year. Nakamura’s father and fellow kabuki star Kanzaburo (53), meeting the press after a performance at the Kabukiza theater in Tokyo, said the media had got hold of the news earlier than his family had planned. He said he would be meeting with Maeda’s father on the 17th of this month to discuss the wedding, which is likely to be a big showbiz event. The couple’s relationship began in 2001 when they appeared together in the NHK drama “Hikari no Teikoku.”

• A roundup of other New Year wedding news…Former top Takarazuka star Aika Mire (44) announced on her blog that she got married at one minute past one o’clock on January 1. According to her management agency, her new husband is ten years younger and runs a sports clinic in Tokyo. Aika revealed in March 2008 that she was battling with cancer and dropped out of a scheduled theater production. But she made a full recovery and returned to the stage last August.

Actress Hatano Hiroko (33) and J-Leaguer Suzuki Keita (27) held their wedding ceremony and reception at the Peninsula Tokyo hotel on January 4. Hatano is expecting a baby in April.

Popular TV Asahi sports announcer Shindo Junya (31) is engaged to get married, according to the Sports Hochi newspaper. He and an airline company employee plan to tie the knot in the spring.

• Not so happy news for actress Tomosaka Rie (29), who divorced from actor Kawahara Masahiko (39) on New Year’s Eve. The two met when they worked together in a stage production in 2000. They married in April 2003 and have a 4-year-old son.

• Guitarist Inoue Takayuki (67) has announced his retirement from the music business. A spokesman for his management agency said Inoue had been struggling with the question of how to live out his twilight years for some time, and made his decision on New Year’s Day. He has been suffering from emphysema, which has made it difficult for him to sing. A concert scheduled for next month has been canceled. Inoue made his name as a founding member of Japan’s top 1960s group the Spiders, who opened for the Beatles. After the band split in 1971, he and fellow member Ohno Katsuo joined with members of the Tigers, another top band of the 60s, to form PYG. He later had several hits with the Inoue Takayuki Band, including the theme for the hugely popular TV series “Taiyo ni Hoero!”