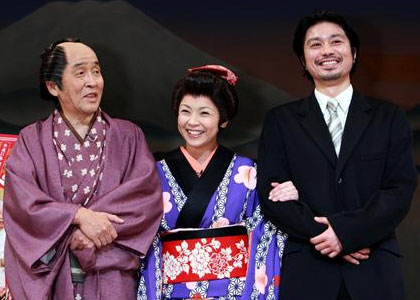 Popular TV talento Hashino Emi (35) yesterday formally announced her recent marriage to actor Tsunashima Gotaro (35). She is currently appearing in a production with veteran comedian Hagimoto Kinichi (67, photo left) at the Meijiya theater in Tokyo. After the final curtain, she surprised the audience of 1,200 with the news that she had tied the knot on New Year’s Day, and called her new husband up onto the stage. Hagimoto has been like a father to Hashino since she came to Tokyo at the age of 17 and joined his “Kin-chan Gekidan” theater group. Hashino first took a liking to Tsunashima in 2006, when he played her fiance in the TBS afternoon drama series “Mikon Rokushimai.” She said she’d like to have two children, though she isn’t expecting just yet.

• Island Records have announced an upcoming second U.S. album release by singer Utada Hikaru (25, profile). The label is currently promoting the all-English single “Come Back to Me” online, including on its MySpace page. There’s no title or info for the upcoming release other than “New album coming soon.” Utada uses just her family name in the U.S. and released the “Exodus” album in 2004. A No.1 on the Oricon chart and a million seller in Japan, it got no higher than No.160 on the U.S. charts. But Utada announced on her blog in October 2007 that she wouldn’t be giving up on the U.S. market.

• The second part of the “20th Century Boys” movie trilogy is to be promoted with one of the local movie industry’s most expensive ever PR stunts. An estimated ¥80 million is to be spent transforming Okamoto Taro’s famous “Taiyo no To” (Tower of the Sun) on January 19. The symbol of the hugely successful 1970 Osaka Expo, the 65m high sculpture is perhaps the most famous example of modern art in Japan. With a couple of modifications, it will become “Tomodachi no To,” named after the mysterious figure who dominates the marketing for the movie series, adapted from a popular manga. The movie opens on January 31.