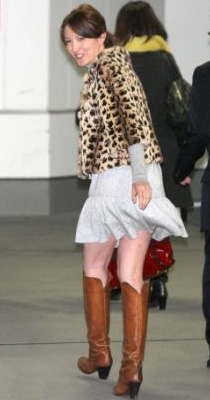 Talento Yamamoto Mona (32) finally returned to work yesterday. Ending a forced leave of absence since an affair with a married baseball star was revealed last July, she appeared in her old live radio slot, supporting Ohtake Makoto (59) on his weekday afternoon live radio show on Bunka Housou. She spoke for about 18 minutes at the start of the show and apologized to listeners, fans and those involved. About 100 emails and faxes arrived during the show, with some 80% of them being supportive of Yamamoto. 10% said she shouldn’t have been allowed back on the show, while the other 10% were upset about the departure of talento Nakajima Miwako (32), her replacement for the last six months. The radio network initially refused to allow the media in to interview Yamamoto after the show, but her management agency decided to let her talk to reporters. She said she hopes to return to her busy TV schedule as soon as offers of work arrive. She was also clear about one thing – she understands that after two strikes, a third similar scandal would mean the end of her showbiz career. Her previous affairs were with a National Diet politician in and Yomiuri Giants player Nioka Tomohiro (32), who since transferred to the Nippon Ham Fighters.

• The copyright fraud case against music producer Komuro Tetsuya (50) started at the Osaka District Court yesterday. Komuro has made it clear he will not contest the charges, which are likely to land him in prison. He is accused of trying to sell the rights to more than 800 of his songs to a Hyogo prefecture investor for ¥1 billion in July 2006, though the rights already belonged to the Avex music label. The following month, claiming that his ex-wife was after his royalty income, he received ¥500 million from the investor. Also on trial in the case is Kimura Takashi (57), auditor for the Tribal Kicks production company of which Komuro is a director. The high profile case drew a lot of public attention, with more than 1,000 people applying for the 61 courtroom gallery seats.