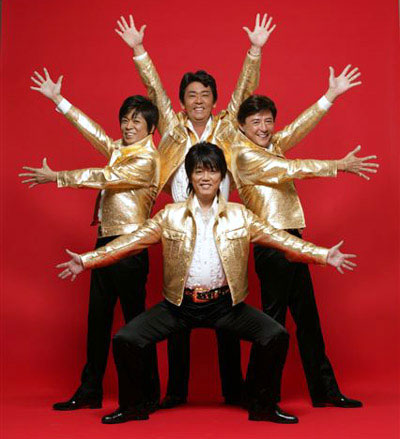 Singer Aoyama Takashi (57, photo left) is currently battling liver cancer, it was revealed on Friday. The announcement came from Egi Toshio (56, photo right), a fellow member of the idol group Four Leaves, who are currently on tour and enjoying a revival. Egi met with reporters on Aoyama’s behalf on Friday and said that his friend had been diagnosed with cancer last October and had told the other members before a concert at the end of November. Aoyama, known by the nickname Taabo, is currently undergoing treatment in hospital but insists on checking out as necessary to take part in the group’s ongoing concert tour. Egi says that his friend puts on a brave face but is having a difficult struggle. In particular he wants to live “even one second longer” for the sake of his daughter, who is now 10 years old. “I’ve told him time and again he should just rest,” he said. “But if I said he couldn’t appear on stage, I fear he’d lose the will to live.” The concert tour is scheduled to continue until March 29. One of the earliest Johnny’s Jimusho (profile) idol groups, the popular singing and dancing quartet debuted in 1967 and made the first of seven straight Kohaku appearances in 1970 before splitting up in 1978. Egi was arrested on drug charges in 1999 but the group reformed in 2002.