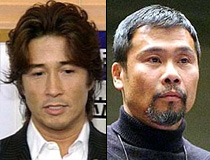 It seems that Osaka District Court prosecutors are not going to let the Haga Kenji case go away quietly. The home of a key witness in the case was recently searched and the man questioned, it was revealed yesterday. A former popular talento and renowned playboy but with a history of financial problems, Haga (47, photo left) was arrested in 2007 and tried last year on charges of fraud and attempted extortion. He was accused of selling unlisted shares in a medical consultancy to a business acquaintance at a hugely inflated price. He and his fellow defendant, former world boxing champion Watanabe Jiro (53, photo right), were also accused of making threats of violence against the man when he sought his money back after the company folded. Both men were widely expected to receive prison sentences. But in a surprise development, and a rare judgment for a Japanese court, they were found innocent of all charges last November. The judge said the main reason for the acquittal was doubts about the reliability of the plaintiff’s testimony. Those doubts resulted from the evidence given by a witness for the defense, a former dentist and friend of Haga. He said he had spoken to the plaintiff and questioned whether he should buy the shares at such an inflated price but was told that the investment would more than pay off once the company went public. This revelation that the plaintiff was aware of the true value of the shares ultimately undermined the whole case. Osaka prosecutors visited the former dentist’s home and he voluntarily submitted to questioning.