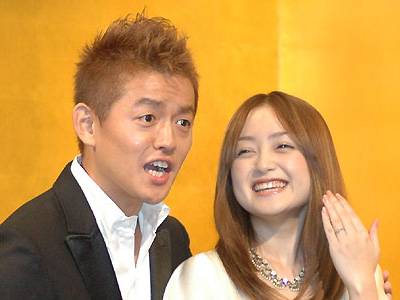 So it’s a “speed divorce” for actress Adachi Yumi and comedian Itoda Jun! Adachi (27) and Itoda (36) announced by fax to the media last Friday that they have formally ended their 3-year marriage. Though a good bit older, Itoda – one half of the comedy duo Speed Wagon – was quite a bit younger than Adachi’s previous boyfriend, actor Kuroda Arthur (47) and the media saw him as a more sensible choice of marriage partner. But showbiz shotgun weddings are notoriously short-lived, and Adachi was pregnant when the couple tied the knot on her birthday in September 2005. They held their wedding ceremony the following November and all seemed rosy. But a few months later Adachi was not impressed when the media reported on her husband’s secret hotel meeting with an ex-girlfriend just days before she gave birth to their daughter in April 2006. A series of media rumors followed of a split between the two, and they are said to have been separated since last September. Itoda was also reported to have taken no interest in raising their child, who was often taken care of by Adachi’s mother. Itoda spoke only briefly to reporters on Saturday, saying that he and his ex-wife had had “differences” and the divorce decision was mutual.

• Pop duo Chage and Aska have denied media reports – also reported here last week – that they are to split up. Their management agency said on its website that they will be sending a clarification to fans in the official newsletter at the end of the month. Though one of the biggest J-pop acts in the 1980s and 90s, ChageAsu have had little commercial exposure in the last few years and have mostly been pursuing their solo careers. Their last live performance together was on Christmas Eve 2007.