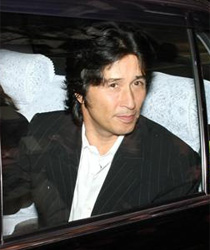 Former talento Haga Kenji (47) and former world boxing champion Watanabe Jiro (53) have both been acquitted on charges of fraud and attempted extortion at the Osaka District Court. The two were arrested a year and five months ago on charges of swindling some ¥370 million from a private investor. They were accused of selling the man shares in a medical consulting company at a hugely inflated price and then threatening him when he tried to get his money back after the company went bankrupt. Prosecutors had sought a sentence of eight years and four months for both the accused. The court case began in January, with both men proclaiming their innocence, and ended in May. But lawyers succeeded in having the case reopened for further examination of witnesses, insisting that the alleged victim had known the true value of the shares he bought. In reading out the “not guilty” verdict on Friday, the judge said there had been reasonable doubt regarding the alleged victim’s testimony. On hearing the verdict, a tearful Haga turned to his wife Mayu (31) – the two were married only eight months at the time of Haga’a arrest. As Haga himself said to reporters after leaving the court, it is extremely rare for a Japanese court case to end in a verdict of not guilty. He is said to be in discussions with his former management agency about a possible return to show business.